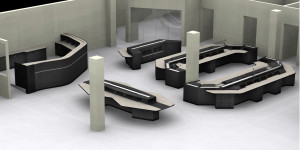 For this project, we expanded our exclusive, two-sided newsroom workstation design from sister station WFTV’s project, by adding a second row of equipment turrets along the workstation’s outer face. Editors and producers sit facing one another, separated by a three-track-wide, T-slot mounting rail, so that monitor arms can be positioned wherever desired, with monitors facing in either direction, leaving one track available to attach privacy screens or other accessories. Two of these 30–long workstations anchored WSOC’s new digital newsroom, each with removable, swappable equipment turrets that preparing the consoles for any future changes. Recessed power strips and dual internal cableways keep all connections organized and accessible. We built and installed a total of twelve custom consoles, including production and reporter’s pods, a web media workstation, and a bi-level, multi-curved Assignment Desk. Developing and producing these complex designs relied heavily on the use of 3D modeling and rendering, for space planning, client visualization, and manufacturing support. Operations began from the renovated newsroom in early 2014.